Once there is a app for that with multitude of administrative clerks and lawyers. Every homosapien can now be made into a sap. To achieve productivity with gig hopping requires extraordinary diligence, exceptional attention, and after your long day of disorienting work, the app producer possibly presumes you are a robot going to rest in a utility closet size home.

Doing a gig such as driving individuals from place to place may seem simple but it's not. Specially since there was a taxi driver profession setting a precedence prior to the gig hopping app.

Even if you drive yourself day to day doesn't prepare you to drive everyone else. For every pickup and drop off would require your mind to format neurological patterns. After each days work those patterns will situate themselves in your mind and hopefully if you do sleep, not just any sleep, you would require what's known as rem sleep (random eye movement). During REM sleep the excess pathways will be garbage collected and other meaningful ones formulized and situated.

Taxi drivers develop a strong hippocampus region of their brain

Imagine this gig of driving passengers was a task you were programming. Let's break this down from a programmable progressive enhancement perspective. Imagine the complex task of driving is one stage supported by certain skill set and can be diagrammed following way:

Skill sets supporting such a stage would be requirements to complete the objective. In this case objective is simply driving. Here are the basic rudimentary skills for simply driving: 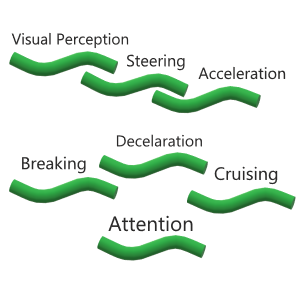 In this scenario you are simply thinking in terms of progressive enhancement. Collision avoidance and following the rules of the road will mostly be low coding once you have progressed through the rudimentary issues.

Remember when you were learning to drive? As you became confident behind the wheel it became difficult to be attentive. While cruising your attention easily diverted. Switching through radio channels, finding the track on the audio cd, mobile phone's Bluetooth audio player to play the right song, answering the phone, or simply carrying a conversation with passengers in the vehicle.

Suppose you decide to not only drive but to provide deliveries. Let's add another stage to our diagram. Delivery will require the following rudimentary skills. 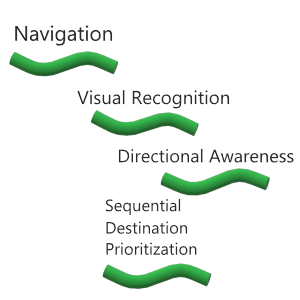 Here is the delivery diagram that would go on top of the existing driving diagram.

Suppose you drive to a single order pick up location and delivery items were loaded on to your vehicle. Also let's say a list of correlating destinations to each loaded item was provided. Although there are gigs requiring multiple order pickup locations and delivery destinations. Let's keep the example as basic as possible.

There are "fifteen minutes of fame" individuals who achieve exceptional results with driving and delivery. Remember "outstanding outliers do not represent averages".

If you insist on automating your driving. You can take your SUV to a local engineer mechanic who would lift up the vehicle and install a part allowing a computer software to control the acceleration, breaking, and turning. You would mostly have success having such a vehicle drive in rural areas.

Unfortunately even in our times an autonomous vehicle driving in urban areas would still require their own designated lane on the road. Also bouncing excessive amounts of LIDAR lasers could be discomforting and annoying for pedestrians. Due to even drops of water having a affect over time.

"TIME the Science of Memory" (https://books.google.com/books?id=8I6BDwAAQBAJ)

"TIME the Science of Memory"

"Driving a taxi to develop hippocampus region of the brain:" (https://youtu.be/sfy9j0h9_O8)

"Driving a taxi to develop hippocampus region of the brain:" (https://youtu.be/gTjJnaDHo5c)